Tucked away from the East Oakland streets, behind a series of large Victorian houses, a small art party was held on September 6th at Canticle Farm. Working with crayons and markers on sketch paper, activist and organizer Niria Alicia (Xicana) encouraged other party participants to create “Bring Our Salmon Home” signs and post them on Instagram with the hashtags #run4salmon and #salmonwillrun. 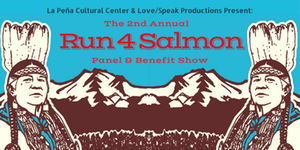 The “Bring Our Salmon Home” slogan stems from the effort by Winnemem Wintu’s Run4Salmon fundraising campaign, which aims to return the sacred winter-run Chinook salmon home to their traditional spawning waters along the McCloud River. At least four distinct runs of California Chinook salmon are now classified as threatened or endangered, per the U.S. Department of Fish and Wildlife.  Dams are sighted as problematic for salmon because they impede access to historic salmon spawning grounds and change the nature of rivers by creating warm, slow-moving water pools that leave salmon more prone to predators. Other factors, such as climate change and drought, are also trouble for salmon, per a May 2017 report by UC Davis and CalTrout.

“We wanted to hold space for people to come and paint the reality that they want to see on those rivers in the face of everything that’s happening with the fish, with the proposal to build the tunnels, declining salmon populations,” Alicia said as she added an additional layer of blue to the waterfall she drew above a thriving salmon. “We think it’s important for us to envision what we want our future to look like and to manifest it in the form of art. Sometimes there’s things you can only communicate through art. There’s beautiful medicine in the silence of creating.” 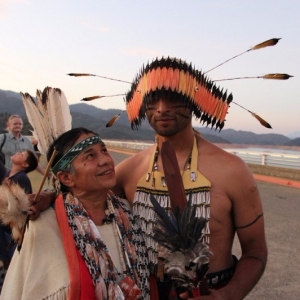 The Winnemem Wintu have been meeting with the United States Bureau of Reclamation (BOR) and the National Ocean and Atmospheric Administration (NOAA) for over seven years. According to the August 2013 Landowner and Stakeholder Workshop program report by the BOR, Chief Caleen Sisk of the Winnemem Wintu spoke about the Winnemem Wintu’s history with the Chinook salmon. Chief Sisk made the case that the salmon were originally sourced from the McCloud River in the late 1800s and are genetic matches to the water shed. She advocated for the use of Chinook salmon from New Zealand as the root stock for re-introduction and indicated the tribe would like to be involved with the reintroduction program. Nearly four years later, the Bureau of Reclamation set aside partial funding for the sample gathering, but an additional $85,000 is needed to ensure proper sample collection. With that, the tribe partnered with GoFundMe to raise the balance. UC -Davis fish biologists are scheduled to perform DNA testing on the samples to confirm to the federal government that the salmon in New Zealand are the direct descendants of the McCloud River winter-run salmon.

Indigenous leaders, such as Alicia, Chief Sisk, Corrina Gould (Chochenyo/Kerkin Ohlone), and Desirae Harp (Mishewal OnastaTis, Diné) worked with a collective of Native and non-native supporters to organize the Run4Salmon campaign, now in its third year. 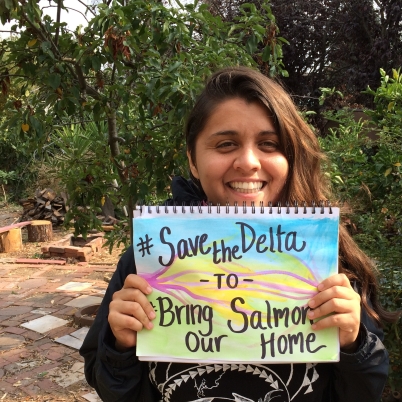 Harp, a member of the San Francisco Bay Area music collective Audiopharmacy, also attended the art party. Her piece was a colorful mélange of sky blue, sunshine yellow, and sage green with “#SavetheDelta” and “Bring Our Salmon Home” superimposed in black marker. She said she joined the campaign due to her people’s connection to the salmon, as well as to the Winnemem Wintu through ceremony and shared mountains. She said she also joined because the movement is women-led.

“I come from Mount Saint Helena and there are a lot of stories talking about the connection between the mountains here in California and the mountains in Hawa’ii,” Harp said. “I met Aunty Pua Case from Hawa’ii, who’s helping to protect Mauna Kea and Big Island, and I met Chief Caleen Sisk who’s helping to protect Mount Shasta, and I wanted to stand in solidarity with these Indigenous women.” Harp added she had also heard about the sacred sites work Gould has done and wants to support her efforts in the Run4Salmon. “As a young Indigenous woman, it’s very difficult to exist in a lot of different spaces. I feel like it’s safe space being with the aunties, and I 100 per cent trust to be under their guidance, and I will walk with them for the rest of my life.”

Events for Run4Salmon 2017 took place in segments by boat, foot, bike, and horseback from September 9 to September 23. The winding 300-mile trek followed the route of the winter-run salmon, commencing  at Segorea Te (also known as Glen Cove in Vallejo, California), traveling along the Bay-Delta Estuary up the Sacramento River, and concluding at a Winnemem Wintu ceremonial site on the McCloud River.