The following review was featured in the Fall 2019 issue of News from Native California:

The 19th Century is thought of as the golden age of American landscape painting. Moving beyond mere artful documentation of place and setting, landscape art became an idea, a propaganda of sorts that spurred settlers West. But, as with many aspects of American history, the settler-colonial perspective rarely paints a full picture. In Shifting Grounds: Landscape in Contemporary Native American Art,  art historian Kate Morris illuminates how Indigenous artists are expanding and re-conceptualizing the subdiscipline to evoke a more “embedded subjectivity” as an alternative to  the popularized distant, single-point perspective.

Morris, a professor of art history and the associate dean of arts and sciences at Santa Clara University, explores the view of contemporary Indigenous art as “a vehicle for the expression of place-based knowledge.” This translates into both written and visual discourses of the various physical and creative approaches used by featured Indigenous artists to subvert mainstream expectations of what landscape imagery should be.

Visually, the book has a sleek, yet vibrant layout, which is apt in that books about art should be designed with an artful awareness. The first three chapters discuss painting as a medium and feature the paintings of Kay WalkingStick (Cherokee) and Jay Lavadour (Walla Walla). The remaining two chapters cover the expanding world of landscape representation through installations (site-specific works usually designed to alter the perception of a space), video, and performance art. Featured works in these mediums include the installations of Alan Michaelson (Mohawk), James Luna (Luiseño), and Kent Monkman (Fish River Band Cree) as well as the mixed media sculpture and performance art of Rebecca Belmore (Anishinaabe).

All of the works displayed explore themes of representation, generational trauma, and resilience, but none feel static in any sense of the word. Even in the more abstract pieces, there is perpetual movement, as if all involved—artist, landscape, and viewer—are in a constant, connected state of transition.  A great example can be found in the Luna’s Creation and Destruction of an Indian Reservation: An American Dilemma (1990) in which Luna dramatizes over the course of four acts the various stages of reservation system development. Not only does the piece serve to highlight the historical division and fencing off of reservation land to the detriment of Indigenous peoples, but it also conveys “anti-invitational aspects.” Morris writes in Chapter Four, Centering, “The presence of the fencing in Luna’s installation contradicts the official language of the highway sign behind it that reads ‘Entering  La Jolla Reservation.’”

Morris’ language is accessible, yet academic, which, depending upon reader proclivities, may enhance or be a barrier to engagement. Given the in-depth analysis of complex and layered works, however, the style choice seems justified. For example, Morris’ discussion of Lavador’s 2013 piece Tiicham, a 102 x 152 inch rectangle comprised of 15 panels, not only provides general art criticism, but also draws from several expert sources to consider Native and non-native views before providing her own analysis.

Covering works created within the last thirty years by Indigenous artists of North America, Shifting Grounds provides a more inclusive perspective into what landscape art was, is, and does.

Below is a short review I wrote for the Fall 2019 issue of News from Native California. I remember writing this around the time my daughter was born almost a year ago.

Shapes of Native Nonfiction is a collection of essays by twenty-one contemporary writers. Edited by Elissa Washuta (Cowlitz) and Theresa Warburton, Shapes emphasizes the equal importance of both form and content in essay writing. 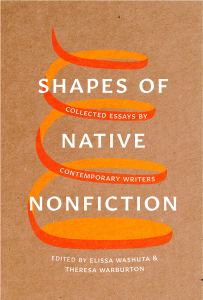 Technique focuses on craft essays, in which prose and poetry are often combined. An apt example is Stephen Graham Jones’ “Letter to a Just-Starting-Out Indian Writer—and Maybe to Myself.” In this series of numbered prose poems, Jones (Blackfeet) advises novice Native writers on how to write from an authentic place while circumventing colonial labels and expectations.

Coiling holds essays that appear seamless and connected. Like coiled baskets woven so tightly that they can hold water, Washuta and Warburton note, the essays in this section unify content far ranging in time, place, and meaning.  Deborah Miranda (Ohlone Costanoan Esselen/Chumash), illustrates this style perfectly in “Tuolumne,” which uses the Tuolumne River as the center of spiral rounds that connect periods of her father’s lifetime and familial influence beyond death:

“But my father never told me what he was thinking that day his dad took him back to the river. What I do know is that in 2009, when my father was dying, he gave my brother this command: ‘Take my ashes back to that river. Scatter me on the Tuolumne.’ He told our sister Louise the same thing over the phone, calling her in San Jose from his hospice room in Everett, Washington.”

Plaiting contains segmented essays from a single source, such as from the author’s life. Kim Tallbear (Sisseton-Wahpeton Oyate) plaits prose with 100-word prose poetry segments in “Critical Poly 100s,” which draws from Tallbear’s polyamorous experiences with multiple human loves and “other-than-human loves,” such as various knowledge forms and approaches to life.

Twining focuses on essays comprised of material from different sources. As with twined baskets, the co-editors write, essays in this section display flexibility in that they combine the author’s personal experience and narrative style with researched material, such as in “A Mind Spread Out on the Ground” by Alicia Elliott (Tuscarora) who correlates the historical etymology of depression with the effects of colonialism:

“I’ve heard one person translate a Mohawk phrase for depression to, roughly, ‘his mind fell to the ground.’ I ask my sister about this. She’s been studying Mohawk for the past three years and is practically fluent. She’s raising her daughter to be the same. They’re the first members of our family to speak the language since priests beat it out of our paternal grandfather a handful of decades ago.”

Shapes of Native Nonfiction is a vibrant, form-conscious essay collection that does well to challenge conventional expectations of what Native nonfiction can and should be; it goes beyond simply providing “Native information” and shows instead “Natives in formation.”

We decided to make our haiku reviews even more excellent—the result: one-minute of 5-7-5 awesomeness. Enjoy:

The new podcast site is live. Check us out for audio-only and enhanced video versions of the podcast at deetsandgeets.com. The latest episode covers Student of the Year 2, Netflix’s Dead to Me, John Wick 3, Game of Thrones S8, Keanu, Bill and Ted 3, Ma movie, and more. You can also find us on Instagram, Twitter, Soundcloud, YouTube, and Apple podcasts by searching for DeetsandGeets.

I’m still updating the site and will include new book reviews there soon. Also, I’ve begun working on the novel again, so the first draft should be finished…whenever it’s finished.

The Deets and Geets crew has experienced the Endgame and we are pleased. Check out our haiku review below.

A quick note—I’ll be migrating this blog to deetsandgeets.com/agnimitrakhan.com very soon. More writing, more podcasting, more everything, but all in one place.

A THREE-HOUR TOUR THROUGH TIME

Captain Marvel is here on International Women’s Day! LRK and I checked it out at a fan event last night. Below is a haiku review to sum up our takeaways. Look out for more in-depth commentary in a future episode of Deets and Geets!

A popular rite of passage for many California fourth graders is the “mission unit,” an element of the state’s History / Social Science educational framework designed to help teachers navigate the complexities of the California mission period. Unfortunately, mission unit lessons often devolve into little more than scale mission models made of sugar cubes and popsicle sticks. The 2016 update to the framework denounces the literal sugarcoating of mission history and provides instead content standards geared more toward researching the experiences of the people who lived in and around the missions.

With that in mind, teachers looking for more mindful material for mission unit lessons may want to consider historical fiction works, such as Gary Robinson’s novel Lands of our Ancestors. Robinson (Choctaw/Cherokee) wrote the book for fourth, fifth, and sixth graders, and notes that while the story focuses on characters from the Chumash Nation, it represents what happened to the Indigenous people from nearly forty tribes who encountered the Spanish priests and soldiers that came to the region to establish religious missions and colonial outposts. Robinson also notes that the Chumash depicted in the book lived in the Santa Ynez Valley and spoke a Chumash language called “Samala.”

Lands of Our Ancestors begins as a light-hearted coming-of-age story during the California mission period. The protagonist, Kilik, is a twelve-year-old boy who trains to become the “ideal Chumash man” like his uncle Salapay, who is as knowledgeable and strong as his name implies. As the narrative progresses, however, an uneasiness sets in.  Kilik’s father reads the night sky and sees an inscrutable change coming for his people. There is anxious talk between Chumash villages of strangers who “speak an odd language and wear odd clothing that covers their entire bodies.” Readers knowledgeable of California mission history will know who the strangers are and what they want. What they won’t know, however, is what happens to Kilik and his family after encountering the strangers. Along with other narrative draws—including relatable characters, high stakes, good pacing, interpersonal conflicts, and balanced syntax—the unknown ending, the open loop within a known history, makes the Lands of Our Ancestors a definite page-turner.

History has been whitewashed for various reasons, some more insidious than others. Land of Our Ancestors strikes a great balance in its effort to provide another perspective of California mission history to young people and their educators.

The Multifarious Writings of I. Agnimitra
Blog at WordPress.com.